So, I woke up sore all over and all because yesterday, I braved my first HIP HOP ABS session.

It’s not like I enrolled in a class or something. I think that’s what the DVDs are all about – to sell to desperately out-of-shape housewives so we can do the workouts at home.

I’ve been asking around to borrow a copy and finally, I got a hold of it and got down to work…and work it out, I did! BOOM! 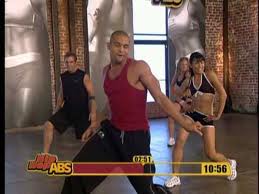 Before this whole momma thing, I used to be…how should I put it? Uhm, I guess, a recovering skinny.

I unwittingly fell into the Anorexia mess and luckily, I recovered. When you’re younger, dieting and exercising tend to be means to be able to wear tight-hugging shirts that bare the navel and as much skin as you can.

I went extremes on the diet, justifying it necessary for my occupation, then – I was a singer for a cover band whose claimed specialization was to make sure that people dance before the parties end.

It wasn’t hard for me to find time to exercise. I danced every night. But when all that dancing ended and the family began, I took on a whole different perspective on exercise.

I’ve been working the stage for years and was practically burning out when I got married. Family life became an

excuse to rest it out. At first, it felt somewhat gratifying.

My only exercise then was walking long distances after work (I took on a few clerical and tutorial jobs) or after church. I was lean so I didn’t put so much importance on exercise.

Taking advantage of the free work-outs at the mall

When I had Pablo (our eldest child), I joined the free retro-groove lo-workout sessions attended mostly by middle aged to elder women at the ATC mall twice a week and it helped me burn a few fats.

In fact, it worked too well for me, I got pregnant again (…and again) !

It was the last two unplanned pregnancies that kinda broke the spell and made me realize that I need to take my health more seriously to be able to keep up to our three amazingly active  little boys.

I found myself dropping off to bed in exhaustion as soon as Jay enters the back door and family days turned into lazy days. We would take the kids out late afternoons or evenings because we felt too tired to do so during the day.

I knew I had to do something or else, my kids will never see daylight again! I made plans with a friend to enroll for adult dancing classes after I gave birth to Lukas (our second child) but we couldn’t find a maid, then eventually, we moved, so that didn’t happen.

It was when I finally turned to DVDs.

My sister-in-law passed on to me one of her exercise DVDs and I pretty much enjoyed the MTV Grind 2 workout because it was more of a dance exercise, but the DVD stopped working when we moved to Taguig.

I’ve seen the promotion of HIP HOP ABS on TV., and I’m no hip hop-per but it seemed like a lot of fun. When Jay came home with the workout DVDs, I immediately planned on getting into it the very next day, so I did. I browsed each video and I decided that the “Total Body Burn” session made sense for me. It started out with a few simple slides, and I thought,hey, I can totally do this.

But it became more intense as it progressed, it was like I never knew what hit me, dude!  My legs felt like jell-o, literally, I couldn’t make the small jumps backwards!

When Shaun T. was asking whoever if they’re having fun or something, I gasped that I wasn’t. Of course, he couldn’t hear me. And good thing that it was a DVD, too, and not an actual live workout session `cause I would’ve thrown a shoe at him for asking that question!

The dawn of a new era!

Anyway, I stuck it out and towards the latter part of the workout, my sentiment shifted. All sweated out and pumped, I was invigorated and I loveeeeeetttttttt!!!! Next time, check the label!

Next time, though, I will go for the less strenuous cardio and sculpt workouts which they have on the schedule.

Uhuh (with a nod and pursed lips), THE SERIES INCLUDED A SCHEDULE that I did not bother to check the first time around. Lesson well learned.

Did I just read an FB status that said, “You shouldn’t ignore your ignorance”?  Yep, baby, with these muscles screamin’ for justice, I think I did.**